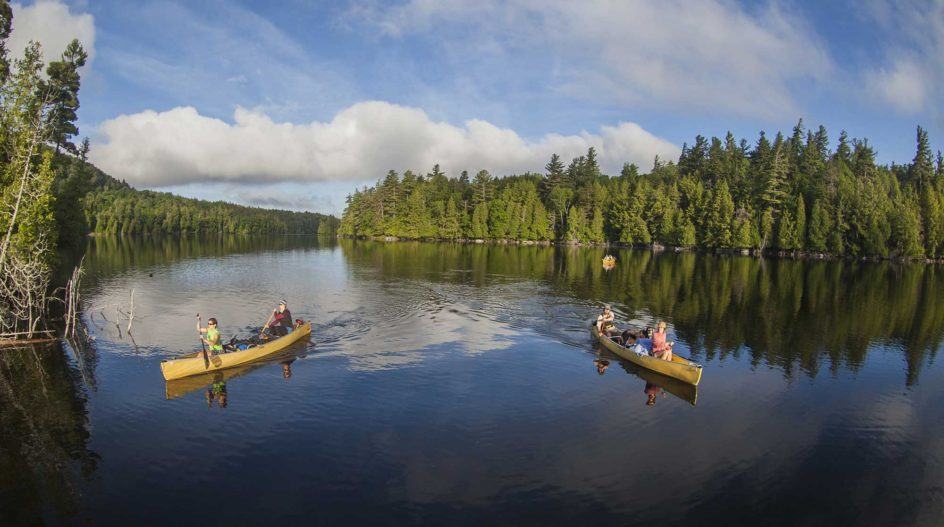 If you want to understand the Adirondacks, Tupper Lake is a good place to start.
The quaint lakeside community provides an ideal launching or landing locale for exploring New York’s sprawling forest park-preserve. Beyond the town’s geography — where the Raquette River leaves the High Peaks Wilderness and begins its tumble north off of the region’s mountain-topped plateau and down to the Saint Lawrence — Tupper offers a longer view into the Adirondacks’ deeper paddling past.

“The waterways were called Venice of the north woods,” says Robbie Frenette, a Tupper Lake fourth-generation local steeped in the traditions of guiding, and building, boats.

You can’t ignore the boats at Frenette’s Raquette River OutfittersOpens a New Window. base on the outskirts of Tupper Lake. The signs of the master craftsman’s hand-hewn efforts make it easy to slow down and appreciate time: walls of tools, sheds lined with seasoned and steamed red spruce ribs and cedar planks to be shaped into custom-built and restored Adirondack guideboats. Frenette talks in measured cadence about how the lightweight dory-like rowboats first opened the area to tourism, making communities like Tupper the crossroads of the region, where the waterways provided the means of connection.

And though Frenette still fields a few requests for guideboat trips during the Adirondacks’ peak summer paddling season, modern interests favor canoeing the connected waterways. Over the 37 years that Frenette has been outfitting trips and building boats, more technology and more tourists has only meant more paddling exploration of the Adirondack Park’s 3,000 lakes and ponds “from ice in to ice out.”

Still, Frenette says, you can’t overlook the original paddling route. That is, the 90 miles “connecting the whole plateau,” from Old Forge northeast to Saranac Lake. Largely running along the Raquette River corridor, it’s often referred to as the Adirondack Canoe Route. Sure there’s other “side arteries” to explore, but as Frenette puts it, it’s a classic, with origins as a travel-way extending many centuries back beyond the late 1800’s heyday of the Adirondack guideboat. The deep roots of the 90-mile route also place it as the western terminus of the Northern Forest Canoe TrailOpens a New Window., which links native and traditional waterways spanning 740 miles across New England from the Adirondacks northeast through the ends of the Allagash in northern Maine.

“If you’ve never been here, you’ve got to do the route,” Frenette says. “It’s still a great way to get introduced to canoeing and the area.”

While most paddlers have little time to devote to experiencing all 90 miles of the NFCT route (let alone the trail’s full 740 miles), this main Adirondack vein still offers more than enough shorter-mileage highlights well worth exploring in a day or weekend.

The small towns along the route will help point you there. We connect with a group of student-instructors from nearby Paul Smith’s College looking to log some guide-in-training miles along the canoe trail. They help point us to the launch in Inlet where the lines between community and waterway blur with lake connections that snake through backyards and businesses alike. The students begin making some comparisons to the canals of Amsterdam.

Matt Dougherty, who directs the college’s recreation department, explains how the town embraces its role as a bridge, quite literally, as our small paddling group begins a portage right through the middle of town from Fifth to Sixth Lake.

“Sometimes you’re doing that and people honk or say ‘good job!’” Dougherty says. “They’re used to seeing people do that every day.”

Folks along the canoe route are well oriented to paddling culture, especially with the Adirondack Canoe ClassicOpens a New Window.. The marquee annual event, which takes place the weekend after Labor Day, sees nearly 300 boats of all types race the 90-mile route (with a few detours off the main NFCT course) in stages over three days.

We hear plenty more about the famed “90-Miler,” as the race is known, as we finish another carry. The wooded trail extends over a marshland onto a boardwalk notorious for bottlenecking the racing field as kayakers re-launch amid larger boats up to seven-person war canoes. Our group has it a bit calmer, left by ourselves to navigate the tight and sinuous Brown’s Tract section into Raquette Lake. Dougherty re-lives a few race experiences, showing us spots where longer race canoes get caught up in the tight turns and oxbows lined with beaver lodges. At a more leisurely pace there’s plenty to enjoy in the three-mile section that’s come to early summer life: dragonflies buzzing over thick lily pads, toads croaking, huge box turtles exploring the shore where we’d even spotted a few wild turkeys.

With only two more days to enjoy the best of the route, we jump ahead to Long Lake, the small town roughly a third of the way up its namesake 14-mile-long lake. Refueling at the historic Adirondack Hotel (pictured above, at right) is a no-brainer, located waterside on a spit of land where NY Route 30 crosses the lake, with restaurant on site, and an NFCT through-paddler’s canoe set up on the veranda to let us know we’re with the right company.

A few miles up the lake is all it takes to make distance from any motorboats on the water. Bobby O’Connor, a fellow instructor and professor at Paul Smith’s remarks how heading up the lake feels like paddling into the mountains, with the Seward range of the High Peaks wilderness unfolding before our group. A nice tailwind allows us to set an early camp at one of the Riverdale lean-tos toward the less-inhabited north end of the lake. There we hear more about the small college that Dougherty jokes is “affiliated with the forest,” and allows students like the trio along with us to take full advantage of the natural surroundings.

While some are earning credit hours, and others payment for training to lead future wilderness excursions on behalf of the college, it doesn’t take an advanced degree to see just how engaged the young paddlers levels of engagement in any and every task at hand. By the time the sun sets and we paddle out to a small islet in the lake. Everyone reverts to carefree laughs, jumping in the cool dark waters.

To the crackle of the sundown fire he dives a bit deeper on what all this time spent outside is worth: “We forget about our true root selves,” he says. “You can come here and have some time to figure out what your core self is or just take time off to hear yourself again or not hear anything.”

As the fire fades, the curve of the Milky Way reflects on the lake’s dark marble surface. I breathe deep and consider that sense of self-connection — of the mental and physical health benefits of just a single night out. A story of Frenette’s jumps to mind: where a cancer scare landed him in Boston for chemotherapy treatment, but the Adirondacks drew him back. The woods were the only place that he knew he would heal.

Before our launch, he handed me a worn copy of The Raquette: River of the Forest, a discontinued classic history of the region. With a dimming headlamp I read this Alfred Street passage from 1860 describing this corner of the woods:

Here, thought I once more, would I live; here in this fresh free wilderness, this tranquil realm of content, where honor is not measured by success, where pretension does not trample upon merit, where genius is not a jest, goodness not a seeming, and devotion not a sham. Here, where the light of day is undarkened by wrong, where solitude is the parent of pure meditation and the solitude is eloquent of God. Here would I live, listening to the forest’s calls to self-communing and all those teachings that guide the insight, soften the heart and purify, while they expand the soul.

Eventually the “glacial widening of the Raquette” that is Long Lake narrows back to a river corridor, and just as soon as it turns from lake to river, the route hits the Raquette Falls Carry. Glad to feel that extra burst of health, the up-and-down portage puts the canoe carts to the test, but a small (at just over a mile) price to pay for the solitude, as we begin to spot a few more fellow paddlers on the swift, meandering float out through flooded stands of silver maple to the Axton Landing takeout.

Here the canoe trail splits off the Raquette River watershed to the lakes of the upper Saranac River, which drains east into Lake Champlain. Our group also splits up with the students heading back to campus. With daylight remaining however, we have time for another night out.

And though Mike Lynch is less than 10 miles from home, the local staff writer-photographer for the Adirondack Explorer is eager to paddle one more canoe trail section in his backyard.

And it’s one he’s seen plenty. In fact, Lynch through-paddled the entire NFCT in 2011. For Lynch, the magic of the Adirondacks is the endless ways in which it offers new chances for exploration.

“It doesn’t just have to be a landscape,” Lynch says. “You can explore different times of day … paddle and see a place you’ve been to dozens of times in a new way because you’re there when the fog is lifting or the there’s a sunrise you’ve never experienced.”

As the daylight fades and we lurch through the manual locks that separate Middle and Lower Saranac Lake, I see his point. We don headlamps as the sky turns pink on our silent final approach to a reserved island campsite. At that moment, a rushed late dinner and tent setups in the dark are merely an afterthought. The only way to have that experience – to catch the light, see the loons, hear the frogs and absorb the unreal scene, alone on the water — is to go and put yourself in that place.